St Leonards-on-Sea (commonly known as St Leonards) has been part of Hastings, East Sussex, England, since the late 19th century though it retains a sense of separate identity. It lies to the west of central Hastings. The original part of the settlement was laid out in the early 19th century as a new town: a place of elegant houses designed for the well-off; it also included a central public garden, a hotel, an archery, assembly rooms and a church. Today’s St Leonards has extended well beyond that original design, although the original town still exists within it.

The land that is now St Leonards was once owned by the Levett family, an ancient Sussex gentry family of Norman origin who owned the adjacent manor of Hollington, and subsequently by their descendants, the Eversfields, who rose to prominence from their iron foundries and widespread property holdings during Tudor times. Eversfields served as sheriffs of Surrey and Sussex in the 16th and 17th centuries and were later baronets before the family became extinct.

The town of St Leonards today occupies, firstly, the fairly steeply climbing land immediately adjacent to the west of Hastings, leading up towards Silverhill and Hollington; and secondly, to the west where the land is lower lying. The latter part of the town – Bulverhythe – is thought to be the original site of the port of Hastings, since cut off by longshore drift of pebbles. Within the higher land there are some small valleys: that through which the Priory stream flows through Alexandra Park being the main one.

Under the pier at St Leonards on Sea 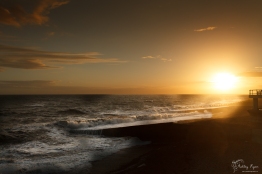