Keswick lies in north-western England, in the heart of the northern Lake District. The town is 31.4 miles (50.5 km) south-west of Carlisle, 22.1 miles (35.6 km) northwest of Windermere and 14.2 miles (22.9 km) south-east of Cockermouth. Derwentwater, the lake to the south-west of the town, is approximately 3 miles (4.8 km) long by 1 mile (1.6 km) wide and is some 72 feet (22 m) deep. It contains several islands, including Derwent Isle, Lord’s Island, Rampsholme Island and St Herbert’s Island, the largest. Derwent Isle is the only island on the lake that is inhabited; it is run by the National Trust and open to visitors five days a year. The land between Keswick and the lake consists mainly of fields and areas of woodland, including Isthmus Wood, Cockshot Wood, Castlehead Wood and Horseclose and Great Wood, further to the south. The River Derwent flows from Derwentwater to Bassenthwaite, the most northerly of the major Cumbrian lakes. The Derwent and its tributary the Greta, which flows through Keswick, meet to the east of Portinscale. The source of the Greta is near Threlkeld, at the confluence of the River Glenderamackin and St John’s Beck.

Keswick is in the lee of the Skiddaw group, the oldest group of rocks in the Lake District. These fells were formed during the Ordovician period, 488 to 443 million years ago; they form a triangle sheltering the town, reaching a maximum height of 931m on Skiddaw itself. To the west of Portinscale, to the south-west of the village of Thornthwaite, is Whinlatter Forest Park and Grisedale Pike. To the east, beyond Castlerigg stone circle, is St John’s in the Vale, at the foot of the Helvellyn range, which is popular with ramblers starting from Keswick. In 2010, Electricity North West, United Utilities, the Lake District National Park Authority and the conservation charity Friends of the Lake District invested £100,000 to remove power lines and replace them with underground cables, to improve the quality of scenery in the vicinity.

Climatically, Keswick is in the North West sector of the UK, which is characterised by cool summers, mild winters, and high monthly rainfalls throughout the year. The wettest months fall at the end of the year, the peak average of 189.3 mm falling in October. Rain, sunshine and temperature figures are shown below.

Keswick is the home of the Theatre by the Lake, opened in 1999. The theatre serves a dual purpose as the permanent home of a professional repertory company and a venue for visiting performers and festivals. It replaced the Century Theatre or “Blue Box”, which had spent 25 years in semi-retirement on a permanent lakeside site in Keswick, after a career of similar length as a mobile theatre. The Alhambra cinema in St John Street, opened in 1913, is one of the oldest continuously functioning cinemas in the country; it is equipped with digital technology and satellite receiving equipment to allow the live screening of plays, operas and ballet from the National Theatre, Royal Opera House and other venues. 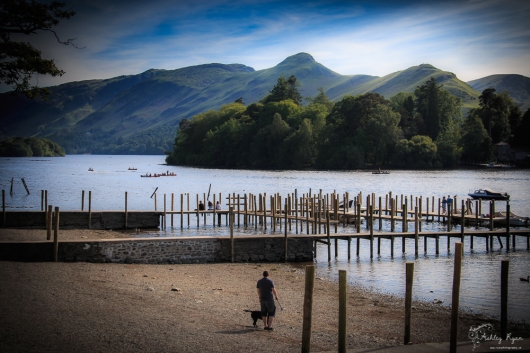 On the lakes at Lakeside near Keswick. 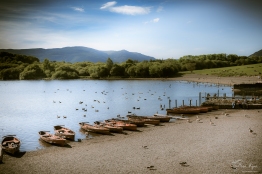 Boating at Lakeside in Cumbria

On the lakes at Lakeside near Keswick.