Canary Wharf is located on the West India Docks on the Isle of Dogs.
From 1802 to 1939, the area was one of the busiest docks in the world. After the 1960s, the port industry began to decline, leading to all the docks being closed by 1980. Of the three main docks of the West India Docks, the Canary Wharf estate occupies part of the north side and the entire south side of the Import Dock (North Dock), both sides of the Export Dock (Middle Dock) and the north side of the South Dock.

Canary Wharf itself takes its name from No. 32 berth of the West Wood Quay of the Import Dock. This was built in 1936 for Fruit Lines Ltd, a subsidiary of Fred Olsen Lines for the Mediterranean and Canary Islands fruit trade. The Canary islands were so named after the large dogs found there by the Spanish (Gran Canaria from Canine) and as it is located on the Isle of Dogs, the quay and warehouse were given the name Canary Wharf.
After the docks closed in 1980, the British Government adopted policies to stimulate redevelopment of the area, including the creation of the London Docklands Development Corporation in 1981 and the granting of Urban Enterprise Zone status to the Isle of Dogs in 1982.
Wikipedia 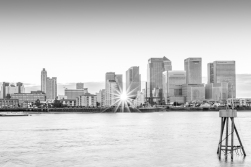 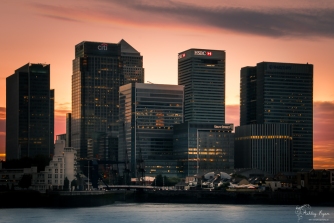 A photograph of Canary Wharf just as the sun was setting and before the buildings started to become illuminated.

Out of Focus – Weekly Photo Challange.