Aira Force is a waterfall in the English Lake District, in the civil parish of Matterdale and the county of Cumbria. The site of the waterfall is owned by the National Trust.

The stream which flows over the waterfall is Aira Beck, which rises on the upper slopes of Stybarrow Dodd at a height of 720 metres (2,362 ft) and flows north-easterly before turning south, blocked by the high heather-covered slopes of Gowbarrow Fell. It turns south on its eight-kilometre journey to join Ullswater, at a height of 150 metres (492 ft). One kilometre before entering the lake, the beck makes the 20 metres (66 ft) leap down a rocky and steep sided ravine at the falls known as Aira Force. The water falls approximately 22 metres (72 ft) to a rocky pool, from where the beck continues through a shallow valley to the lake.

The river name Aira is derived from Old Norse eyrr, a gravel bank, and Old Norse á, a river, hence The river at the gravel bank, a reference to Aira Point, a gravelly spit where the river enters Ullswater. The Old Norse word fors, waterfall, has been adopted into several northern English dialects and is widely used for waterfalls, with the English spelling ‘Force’. Thus, The waterfall on gravel-bank river. 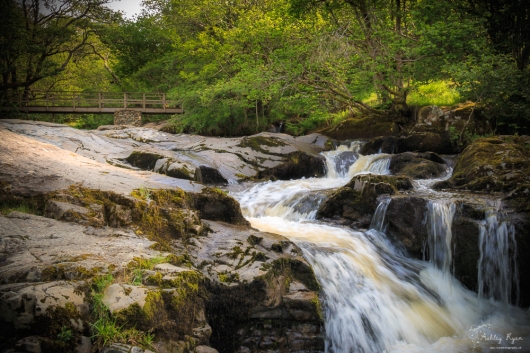 A photograph of cascading water at Aria Force in Cumbria.

Fast flowing water at Aria Force near Ullswater in Cumbria 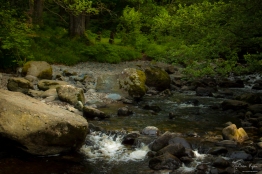 A photograph of Aria Force stream in Cumbria

The stream at Aria Force in Cumbria 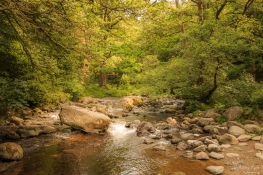 A photograph of Aria Force in Cumbria 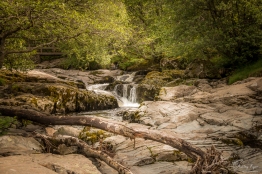