The above photograph is a HDR composite taken at Northward Hill Nature Reserve… it was only a brief stop and this was taken at an off beaten track near the actual farm.  As it was in a dark secluded place, and we didn’t bother to use tripods we were lucky that the three shots turned out without too much camera shake. 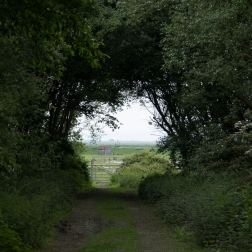 For this photo, all the processing was done in Lightroom and I used Nik Collection HDR Efex Pro 2 to create the initial HDR Image.

I liked what Nik HDR did and I used a Deep Preset before exporting my photo back into Lightroom.  The first I did was find a suitable White Balance, and then I played around with the Tint and Temperature Sliders in the Basic Panel.  I then went to the Lens Correction Panel and ticked the boxes for Remove Chormatic Aberration and Enable Lens Profile.

My next task was to crop the photo using the Crop Tool and straighten the photo a little using the Angle Slider.  I then used Preset by Serge Ramelli called Tone:Orange City Street and I played around with the Contrast, Exposure and Saturation.  Then I went to the Tone Curve Panel and then used the Strong Constrast Preset and played around with the Dark Tones Slider.

I then added another Serge Ramelli Preset called Tone:Golden Age.  I then played around with Exposure and Saturation Sliders in the Basic Panel.

The settings for the Graduated Filters, which were included in the Preset, were slightly altered, I then went to the Details Panel, where I added some Sharpening and played around with the Masking Slider.  I then did some Noise Reduction and that was it… for this image.

Except for using Nik Collection HDR Efex Pro 2 for merging my shots into HDR, the whole processing was done in Lightroom.